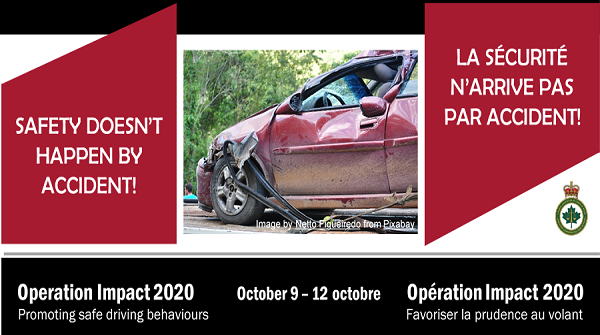 Operation Impact is a public awareness campaign set to take place over the Thanksgiving weekend, from October 9th - 12th, 2020.  This year's theme is Safety Doesn't Happen By Accident which emphasizes the role each of us has to play to support traffic safety on the streets and highways in our community. The campaign will once again focus on education and enforcement of impaired driving due to alcohol, drugs and fatigue, aggressive driving, distracted driving and the use of seat belts and child car seats. These are the main causes of death and injury on Canadian roadways.

A toolkit has been produced for all policing partners across the country to help promote events being planned in their respective region, to respond to inquiries, and to generate media and public interest.

Refer to the left navigation bar to access the different resources of the campaign toolkit.