Chief Danny Smyth becomes the new President of the CACP 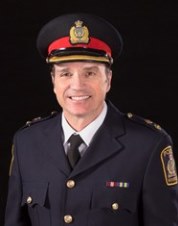 OTTAWA, ONTARIO – The Canadian Association of Chiefs of Police (CACP) has elected Chief Danny Smyth of the Winnipeg Police Service to serve as the new President of the association for a two-year term. Chief Smyth was unanimously supported by the membership of the CACP during its Annual General Meeting on July 25th, 2022.

Chief Smyth has been a member of the Winnipeg Police Service for 30 years. He is a second generation police officer, following his father Stan into policing in 1986. Chief Smyth was born and raised in Winnipeg where he resides with his wife Cynthia and their two children.

During his career, he has worked in several areas of the Police Service including Uniform Operations, Intelligence, Organized Crime, and Organizational Development.

In 2005, he was promoted to the senior rank of Inspector. In 2012, he was promoted to Superintendent. During that period, he played key roles in the establishment of a full-time Tactical Support Team, the Street Crime Unit, and the Counter-Exploitation Unit. In 2015, he was appointed Deputy Chief where he was assigned to oversee the Criminal Investigations Bureau which includes Homicide, Major Crimes, Organized Crime, and Professional Standards. In 2016, he was formally appointed Chief of Police.

Chief Smyth is known as someone who enjoys the challenge of new opportunities and embraces change wholeheartedly. He achieved a Bachelor of Arts Degree in 1983, and then in 2006 received a master’s degree in organizational management.

Chief Smyth has also been a member of several professional organizations, including the Faculty of the University of Winnipeg where he taught as a member of the Criminal Justice Department. He was appointed and served as an Aide de Camp for the Lieutenant Governor of Manitoba from 2010 to 2015. He has served as President of the Manitoba Association Chiefs of Police. He has been an active member of the CACP’s Board of Directors, and now proudly assumes the leadership of the association as its President, replacing Deputy Commissioner Bryan Larkin who will remain on the Board as Past President.

The Canadian Association of Chiefs of Police was established in 1905 and represents approximately 1,300 police leaders from federal, First Nations, provincial, regional and municipal, transportation and military police services across Canada.  The Association is dedicated to supporting police professionals through innovative and inclusive police leadership to advance the safety and security of all Canadians.