The first laureate of this year’s award is Superintendent Kevin Lamontagne of the Royal Canadian Mounted Police (RCMP). He is recognized as a leader among leaders who exemplifies the dedication and strategic efforts of the policing community nationally and contributes to Canada’s international law enforcement capacity building efforts. 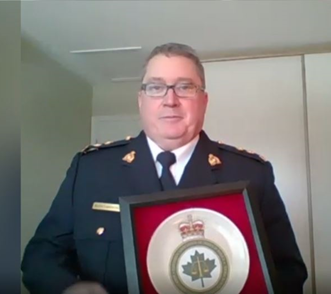 Superintendent Lamontagne currently serves as the Director of the RCMP Peace Operations Program and leads Canada’s international commitment under the Canadian Police Arrangement (CPA) between three Ministries, Public Safety Canada, Global Affairs Canada, and the RCMP. He operationalizes all Canadian police deployments in high-risk fragile states around the world and fosters partnerships with over 30 police services in Canada.

In March 2020, Superintendent Lamontagne would be faced with a multitude of challenges as the pandemic hit on a global scale. His focus quickly shifted to duty of care for all deployed resources, and he adeptly ensured their health and safety due to his in-depth knowledge of the many steps, networks and logistics involved in redeploying troops.

During the last year, Superintendent Lamontagne has been a pillar of strength and support not only for his team in Canada, but also for the CPA missions across the globe. His agile decision-making skills and strong leadership provided relief and created feeling of support by those called upon to serve abroad.

Superintendent Lamontagne’s commitment and determination to care for deployed officers was unwavering and relentless. His outstanding partnership building skills and his ability to keep our Canadian officers safe, especially in times of crisis, are inspiring.

Under his stewardship, 46 highly trained Canadian police officers were deployed internationally since March 2021 and are contributing to creating a safer and more stable global environment. This demonstrates the importance of the Canadian international footprint even during these unprecedented times. 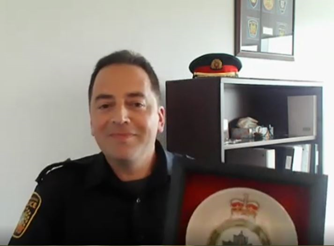 For reasons of confidentiality and due to ongoing investigations, the name of the second award recipient is not being disclosed. Deputy Chief Nick Millinovich of the Peel Regional Police Service accepted the award on behalf of the recipient.

Every year, thousands of children become victims of online exploitation. The online environment is a dangerous place, particularly during a global pandemic. This award recipient has demonstrated a passion and commitment to making a difference in the lives of vulnerable people targeted  by this type of cybercrime.

The laureate’s efforts have resulted in a steady flow of valuable evidence that not only assists authorities in identifying suspects but provides the necessary information to help locate them and lay the ground work for their physical surveillance. Persistent efforts have allowed the team to gather further details related to other possible victims. Working closely with Canadian and international authorities, suspects have been arrested, and charges have been laid.

The successful apprehension of a child sexual predator relies heavily on the evidence that is gathered. Success in a number of such cases can be attributed to the tireless work of our laureate and in the close partnerships established with local units and cross border agencies. The winner’s victim-centered approach, work ethic and dedication are well-recognized, and this person’s knowledge and skills are sought after by other police agencies.

The contributions made on global law enforcement matters by these two award recipients are beyond measure. We are grateful to them for their unique and impactful contributions. They are excellent examples of  the success of international cooperation and of the impact Canada has in law enforcement worldwide.