Ottawa, On – The Canadian Association of Chiefs of Police (CACP) is pleased to announce that Gatineau Police Service Directeur Mario Harel has been elected to serve as its new President. Directeur Harel was unanimously supported by the membership of the CACP during its Annual General Meeting in Ottawa, Ontario. Directeur Harel is a highly-decorated officer with 32 years of policing experience and an impressive history of contribution to the CACP having served on the Board of Director’s and as Vice-President. He was awarded the honour of Officer of the Order of Merit of the Police Forces. (please see bio attached). 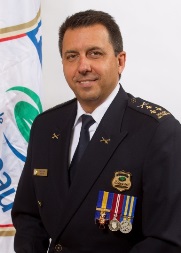 Saskatoon Police Service Chief Clive Weighill has now completed his 2-year term as President. Stated Directeur Harel, “On behalf of the membership, I would like to thank Chief Weighill for his outstanding leadership and dedication as President. During his term he has actively engaged the new government on our respective priorities, established a strong commitment towards our indigenous peoples and focused on mental health - both in terms of police responses and the mental health of our own officers.”

Directeur Harel recognized the valuable efforts of the CACP Executive, Board of Directors and the 20 specialized committees. “These leaders work on the cutting edge of public safety and security issues in Canada. They are dedicated towards continuously improving Canadian policing and its role within the criminal justice system and they do so on top of their duties within their home police agencies. Their efforts are invaluable.”

CACP committees have been extensively studying the potential impacts on public safety and communicating with the Federal Task Force. Ensuring our ability to combat impaired driving is a primary concern for all Canadians. We need to define impairment, ensure there are roadside testing tools available to officers, and train and invest in more Drug Recognition Experts. “

I echo the comments of Chief Clive Weighill whom I have asked to remain involved in the inquiry moving forward. Policing has changed dramatically in the last decade. Procedures involving missing persons, cultural awareness amongst officers, community outreach and education have become priorities of policing services in Canada.

We need to focus on examining the root causes of why these women and girls are the targets of violence. If we don't solve the issues of poverty, poor housing, disadvantage we're still going to continue to have women violently assaulted, murdered or missing.

Chief Terrence Cunningham, President of the International Association of Chiefs of Police (IACP) spoke to journalists on this issue of ‘Going Dark’ and the Challenges of Collecting Electronic Evidence .

A backgrounder can be found at: http://www.theiacp.org/portals/0/documents/pdfs/IACPSummitReportGoingDark.pdf

Resolutions Adopted at the CACP AGM

(detailed backgrounders on each resolution can be found at www.cacp.ca)

Four resolutions were passed at the CACP AGM:

Canadian Association of Chiefs of Police

The Canadian Association of Chiefs of Police was established in 1905 and represents approximately 1,000 police leaders from across Canada.  The Association is dedicated to the support and promotion of efficient law enforcement and to the protection and security of the people of Canada. Through its member police chiefs and other senior police executives, the CACP represents in excess of 90% of the police community in Canada which include federal, First Nations, provincial, regional and municipal, transportation and military police leaders.

Mario Harel, who has served the public for more than 32 years, was sworn into the highest position in the Gatineau Police on February 4, 2009.

Committed to his career, Mario Harel acquired solid experience through important positions in a range of jurisdictions, in particular the bureau of criminal investigations, and in units dedicated to road safety, special events and crime prevention.

His operational and administrative expertise, his involvement at the regional, provincial and national levels, as well as his proven management skills in an important police organization, are among the key assets that lend him a better overall perspective on the challenges faced by a leader in the field of public safety.

Committed to giving back to the community, Mario Harel has been involved in several social causes over the years. He chaired the municipal affairs division of the 2015 United Way campaign, and was the campaign director for Ville de Gatineau in 2010 and 2011. Mario Harel is a member of the Board of Directors of the Missing Children Society of Canada. In addition, he was delighted to support projects proposed by teens and to address their original challenges, particularly in regard to violence prevention in schools.

Mario Harel was appointed officer of the Order of Merit of the Police Forces on January 11, 2013. He is the Vice-President of the Canadian Association of Chiefs of Police (CACP), and was a board member of the Association des Directeurs de Police du Québec (ADPQ). Mario Harel is a graduate of the executive management program at the HEC Montréal.